AAAS and the University of South Florida announce 2012 Fellows

USF among top 10 organizations worldwide with Fellows named this year

Washington, D.C. – Fifteen faculty members at the University of South Florida in Tampa, have been named Fellows of the American Association for the Advancement of Science (AAAS). Election as an AAAS Fellow is an honor bestowed upon AAAS members by their peers.

This year AAAS members from 245 organizations, including universities and institutions worldwide, have been awarded this honor by AAAS because of their scientifically or socially distinguished efforts to advance science or its applications. 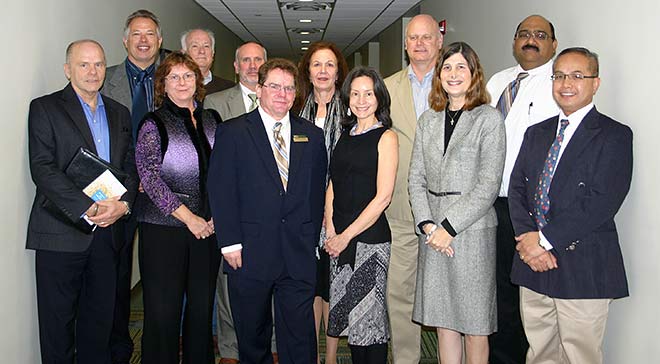 "The University of South Florida is proud of our accomplished faculty members," said Dr. Paul R. Sanberg, AAAS Fellow and vice president for research and innovation at USF. "The breadth and depth of faculty scholarship and service recognized by this honor is a key reason for USF's growth as a top global research university."

New Fellows will be presented with an official certificate and a gold and blue (representing science and engineering, respectively) rosette pin on Saturday, 16 February from 8 to 10 a.m. at the AAAS Fellows Forum during the 2013 AAAS Annual Meeting in Boston, Mass.

This year's AAAS Fellows will be formally announced in the AAAS News & Notes section of the journal Science on 30 November 2012.

AAAS Fellows from the University of South Florida


As part of the Section on Anthropology:


As part of the Section on Biological Sciences:


As part of the Section on Education:


As part of the Section on Information, Computing & Communication:


As part of the Section on Neuroscience:


As part of the Section on Pharmaceutical Sciences:


As part of the Section on Physics:


As part of the Section on Social, Economic and Political Sciences:


The tradition of AAAS Fellows began in 1874. Currently, members can be considered for the rank of Fellow if nominated by the steering groups of the Association's 24 sections, or by any three Fellows who are current AAAS members (so long as two of the three sponsors are not affiliated with the nominee's institution), or by the AAAS chief executive officer.

Each steering group then reviews the nominations of individuals within its respective section and a final list is forwarded to the AAAS Council, which votes on the aggregate list.

The Council is the policymaking body of the Association, chaired by the AAAS president, and consisting of the members of the board of directors, the retiring section chairs, delegates from each electorate and each regional division, and two delegates from the National Association of Academies of Science.

USF faculty award winners, including the AAAS Fellows, are featured on the university's Faculty Honors, Prizes and Awards website (awards.research.usf.edu).

Judy Lowry can be reached at jhlowry@usf.edu.

The American Association for the Advancement of Science (AAAS) is the world's largest general scientific society, and publisher of the journal, Science (www.sciencemag.org) as well as Science Translational Medicine (www.sciencetranslationalmedicine.org) and Science Signaling (www.sciencesignaling.org). AAAS was founded in 1848, and includes 261 affiliated societies and academies of science, serving 10 million individuals. Science has the largest paid circulation of any peer-reviewed general science journal in the world, with an estimated total readership of 1 million. The non-profit AAAS (www.aaas.org) is open to all and fulfills its mission to "advance science and serve society" through initiatives in science policy, international programs, science education, and more. For the latest research news, log onto EurekAlert!, www.eurekalert.org, the premier science-news Web site, a service of AAAS.