Hall of Fame now has its first scientist couple 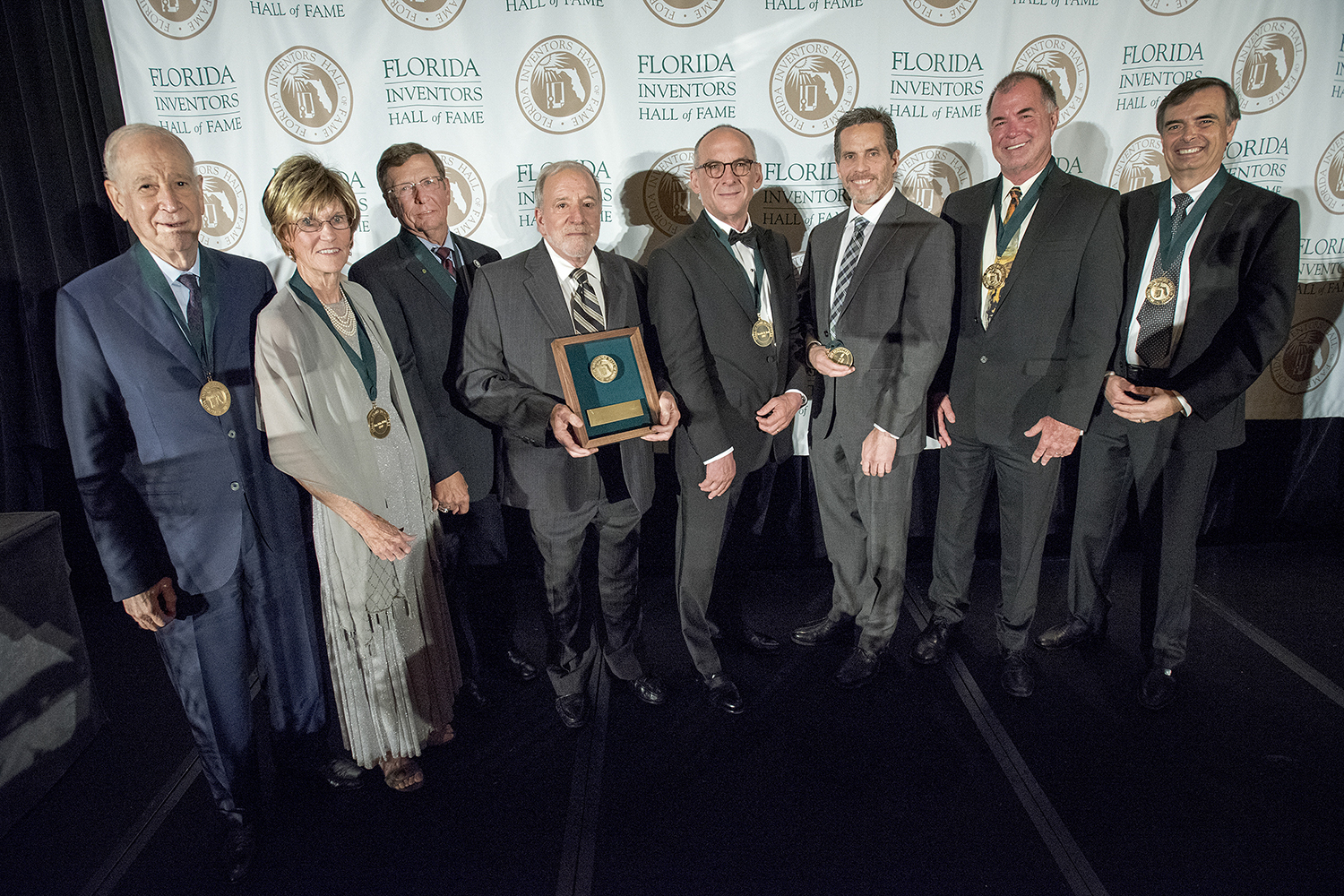 TAMPA, Fla. Eight individuals – including the first husband-wife inventive team – were formally inducted into the Florida Inventors Hall of Fame at a Nov. 6 gala that drew 330 attendees in celebration of the state's rich history of innovation.

Andrew Hirshfeld, Commissioner for Patents for the U.S. Patent and Trademark Office, presented the official medals to the 2017 class, which collectively holds more than 270 U.S. patents. Hirshfeld noted that as one of the nation's most inventive states, Floridians have created a patent powerhouse – filing nearly 10,000 patent applications and being granted more than 5,100 patents in FY 2016 alone.

"Because of the eight talented and forward-thinking individuals in the Class of 2017, our nation has leading technology in solar energy, artificial intelligence, and mobile communications," Hirshfeld said. "Because of tonight's honorees, we have better medical care, global connectivity and the first topical treatment for glaucoma. … Each of tonight's honorees has shaped the future with their intellect, work ethic and drive. Each of them has made life better for others."

The event was the 4th annual ceremony for the Florida Inventors Hall of Fame, whose home is at the USF Research Park where the inventors are recognized in the Inventors Walk of Fame and in an exhibit of artifacts. The new honorees join 20 fellow Floridians and former Florida residents – including Thomas Edison, Henry Ford, John Gorrie and Robert Cade – who have contributed to the state's rich history as a leader in innovation.

"As a community, we embrace and celebrate invention, innovation and creativity as essential components of success," said USF System President Judy Genshaft. Originally scheduled for Sept. 8, the gala was rescheduled due to Hurricane Irma. Due to the change, two inductees – Richard Gitlin of the University of South Florida and Issa Batarseh of the University of Central Florida – were unable to attend. Designees from their respective institutions accepted the medals on their behalf.

Nominees, who must have at least one U.S. patent and a connection to Florida, were nominated through an open process and elected by a selection committee comprising distinguished leaders in research and innovation throughout Florida. 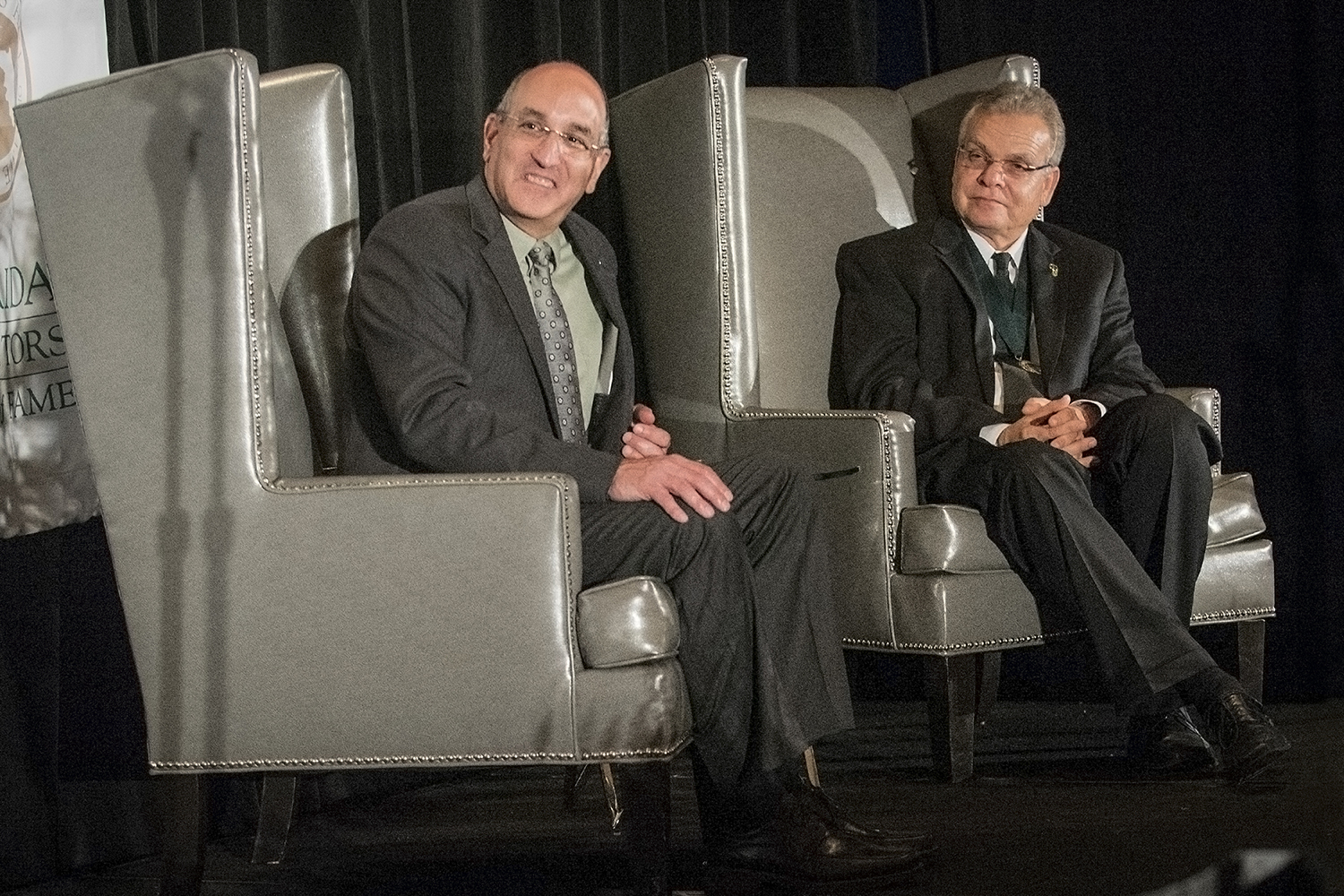 The 2017 inductees of the Florida Inventors Hall of Fame are: 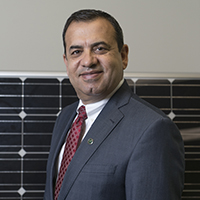 Issa Batarseh, director of the Florida Power Electronics Center and professor of electrical and computer engineering at the University of Central Florida in Orlando, for inventing low cost, high efficiency micro-inverters for photovoltaic (PV) applications that led to the creation of the first compact single solar PV panel. Batarseh holds 31 U.S. patents. 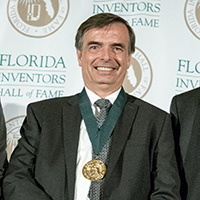 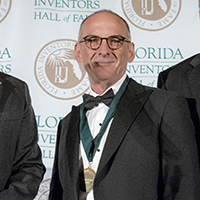 Kenneth M. Ford, co-founder and CEO of the Florida Institute for Human and Machine Cognition, in Pensacola and Ocala, for his pioneering work in artificial intelligence and human-centered computing, and for his significant contributions to the United States and Florida's technology and research communities. Ford holds two U.S. patents. 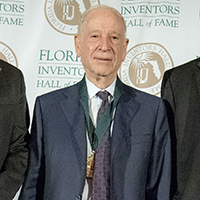 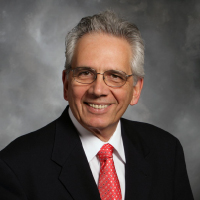 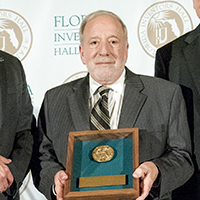 Thomas H. Maren (1918-1999), physician, Graduate Research Professor at the University of Florida (UF) in Gainesville, and charter member of the UF College of Medicine faculty, where he chaired the Department of Pharmacology for 22 years. Maren's research resulted in the invention and commercialization of Trusopt®, the first topical treatment for glaucoma. He is a named inventor on two U.S. patents. His son, Peter Maren, accepted the medal on his family's behalf. 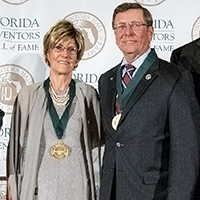 T. Dwayne and Mary Helen McCay, the first scientist couple nominated to the Hall of Fame, jointly hold 15 U.S. patents in the area of metallurgical engineering, specific to laser-induced surface improvement (LISI), that have greatly contributed to increased patient safety and improved medical outcomes in facilities nationwide. Dwayne McCay is president and CEO of the Florida Institute of Technology (FIT) in Melbourne, and Mary Helen McCay is a native Floridian, Florida State University and UF alumnus, former NASA Payload Specialist Astronaut, and director of the National Center for Hydrogen Research at FIT.

More information is at http://www.floridainvents.org/.