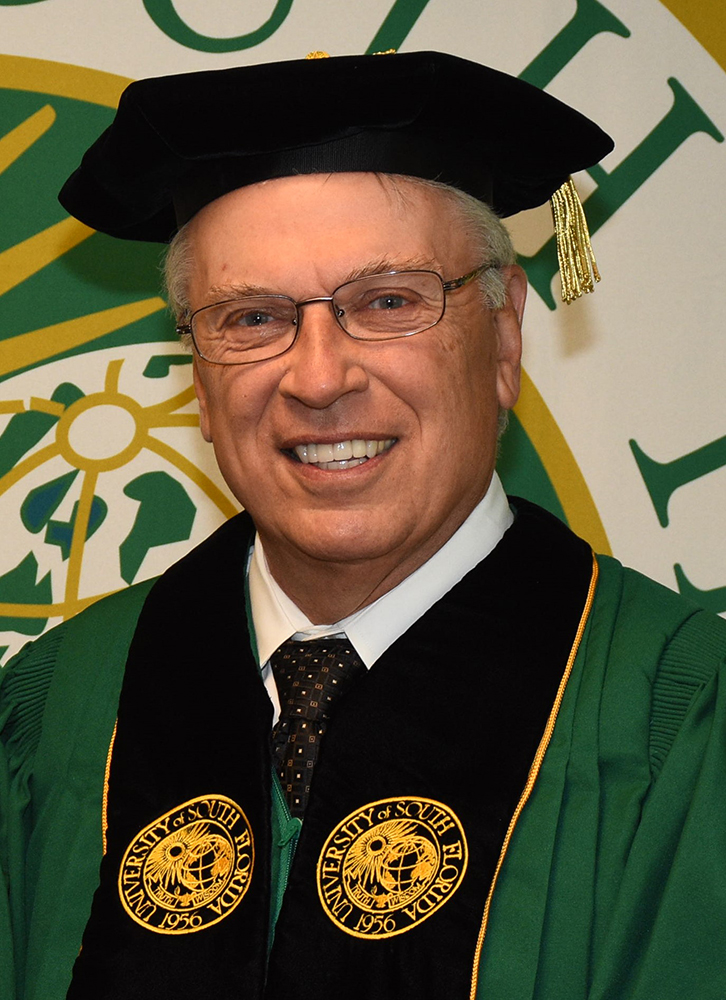 TAMPA, Fla. – University of South Florida alum Phillip Furman, who earned a master’s degree in microbiology in 1971 and went on to develop antiviral drugs used to treat some of the most deadly diseases of our times – including AIDS – was named Wednesday as a 2018 inductee to the Florida Inventors Hall of Fame.

Furman, who holds 20 U.S. patents, is the co-inventor of the first effective anti-HIV drug, AZT, and played a leading role in developing drugs to treat diseases such as herpes and Hepatitis C.

After receiving a master of science degree from USF, Furman earned a PhD at Tulane University and built a distinguished career in the pharmaceutical and biotech industries at leading research companies such as Wellcome Research Laboratories, Triangle Pharmaceuticals Inc., and Pharmasset, Inc.

Furman began his notable work in the 1970s, when he investigated potential treatments for herpes viruses and worked with Gertrude Elion, a Nobel Laureate, on developing the drug acyclovir. From 1985 until 1993, he was among the legion of scientists responding to the AIDS epidemic and made a breakthrough discovery as the lead scientist working on zidovudine (AZT) as the first antiviral agent approved to treat HIV. Historians credit the approval of AZT as the beginning of an era of drug development that helped turn an HIV diagnosis from being a death sentence to a disease that could be managed long-term.

In the 1990s, Furman continued his work on HIV and expanded to hepatitis B virus associated liver disease and played a key role in the discovery and application of lamivudine (3TC) and the drug emtricitabine. More recently, he worked on antiviral drugs for the hepatitis C virus (HCV) and collaborated on the creation in what is now considered the key treatment, Sofosbuvir.

USF Professor James Garey - who was the founding chair of USF’s Department of Cell Biology, Microbiology and Molecular Biology and nominated Furman for the Florida Inventors Hall of Fame - said Furman played a central role in the development of many of the most important antiviral drugs of modern times while his scientific research resulted in numerous seminal publications that advanced medicine worldwide.

“He is a pioneering humanitarian scientist who is very much deserving of induction to the Florida Inventors Hall of Fame,” Garey said.

In 2015, Furman received the Gertrude Elion Lecture award for his contributions to the field of antiviral research from the International Society for Antiviral research. In 2016, he received the University of South Florida Department of Cell Biology, Microbiology, and Molecular Biology Outstanding Alumnus Award. A year later, USF awarded him an honorary Doctor of Science Degree in recognition of his achievements.

Furman is the past president for the International Society for Antiviral Research and a St. Augustine, Fla., resident.

Furman joins a class of Florida Inventors Hall of Fame inductees which includes Sara Blakely, a graduate of Florida State University and inventor of SPANX®; the late Edwin Link, who invented the flight simulator in the 1920s; Florida native Emery Brown, a member of all four National Academies whose research has advanced anesthesiology; Richard Houghten, for his groundbreaking research that advanced the field of drug discovery; Sudipta Seal, whose work has led to nano-medicine breakthroughs; and Herbert Wertheim, an optometrist whose eyeglass lenses have helped prevent cataracts and other eye diseases.

Hall of Fame nominees, who must have at least one U.S. patent and a connection to Florida, were nominated through an open nomination process and elected by a selection committee comprising distinguished leaders in research and innovation throughout Florida.

To learn more about the Florida Inventors Hall of Fame, visit http://www.floridainvents.org/.

About the University of South Florida System
The University of South Florida System is a high-impact, global research system dedicated to student success. The USF System includes three institutions: USF; USF St. Petersburg; and USF Sarasota-Manatee. The institutions are separately accredited by the Commission on Colleges of the Southern Association of Colleges and Schools. All institutions have distinct missions and their own detailed strategic plans. Serving over 49,000 students, the USF System has an annual budget of $1.6 billion and an annual economic impact of $4.4 billion. USF is a member of the American Athletic Conference.

About the Florida Inventors Hall of Fame
The Florida Inventors Hall of Fame (FIHF) recognizes and commends Florida inventors whose achieve¬ments have advanced the quality of life for Floridians, the state and the nation. Founded in 2013 and housed in the University of South Florida Research Park in Tampa, FIHF was recognized by Florida Senate Resolution 1756 in April of 2014. FIHF encourages individuals of all ages and backgrounds to strive toward the betterment of Florida and society through continuous, groundbreaking innovation, and, by commending the incredible scientific work being accomplished in the state, to further the growth of Florida’s innovation sector.