USF Forum on Aging & Technology Brings Researchers and Industry Together 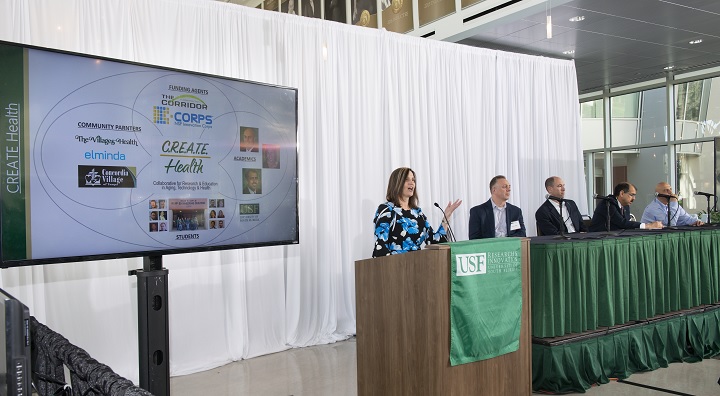 USF College of Engineering Associate Professor Carla VandeWeerd shares insights into a project that uses sensor technology to gather information on the health status of people aging in place.

TAMPA – In the not too distant future, the homes of elderly people might be outfitted with sensors that can detect if they are up and moving around, have taken their medicine or received a visit from a friend. Hearing aids will use artificial intelligence to supplement sounds that are no longer naturally detectable, and automated vehicles will allow families to avoid the difficult conversation on when to take away the keys.

As the nation grows older, technology will be a major part of how people will live more independently and with dignity, and to those ends University of South Florida researchers spent a recent day sharing their projects with companies and organizations working to bring to market innovations for aging well. The Feb. 27 forum – the first of its kind for USF researchers – was organized by USF’s Office of Corporate Partnerships and drew nearly 100 participants.

"We’re one of the few universities in the country with a strategic plan for research – one that not only focuses on aging and degenerative diseases, but a plan that makes technology transfer a pillar of all that we do," said Dr. Paul Sanberg, USF's Senior Vice President for Research, Innovation & Knowledge Enterprise. "Our aim is to create a real-world impact with our research, and we are always glad to meet like-minded organizations and companies who are relentlessly focused on that same goal."

Faculty from the College of Engineering, College of Nursing, School of Aging Studies and other departments across campus engaged in discussions with organizations such as the AARP Innovation Lab “The Hatchery” and hearing technology giant Sonova. International companies such as VRHealth, which uses virtual reality technology for physical therapy; and patient data visualization company MediVu also presented at the forum, along with Florida's GuideWell Innovation.

The landmark day concluded with the signing of a memorandum of understanding between USF, Tel Aviv University and the Florida-Israel Business Accelerator to collaborate on future research and development projects around aging and technology. Like USF, Tel Aviv University has a strong research program in those areas and FIBA has been successfully working to bring new startup technology to market through its accelerator programs. 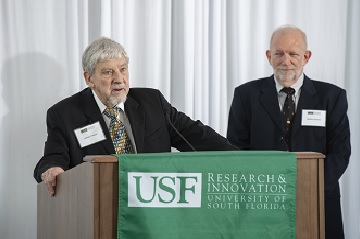 Demographics are driving the discussion: By 2030, nearly one quarter of the population of Florida – now the nation’s third largest state – will be over the age of 65. The U.S. Census Bureau also reports that by 2030, all Baby Boomers will be older than age 65 and for the first time in U.S. history, older people will outnumber children.

The day opened with a presentation of on the relatively young field gerontechnology – created just a few decades ago by Dr. James Fozard, who holds a courtesy faculty position in USF’s School of Aging Studies, and Dr. Bill Kearns, who is a retired associate professor from USF’s College of Behavioral and Community Sciences.

One of the projects highlighted at the event comes from USF College of Engineering faculty Dr. Carla VandeWeerd and Dr. Ali Yalcin, whose C.R.E.A.T.E. Health Lab focuses on the intersection of aging and technology. The researchers have developed a system of sensor technology together with the needs of older people who want to remain in their homes – a trend called "aging in place" that is expected to grow rapidly in coming decades.

The USF researchers also have partnered with brain mapping technology company elminda – whose technology is designed to reliably assess cognitive function in older adults and identify normal cognitive decline from the early stages of neurodegenerative disorders such as Alzheimer's disease.

Dr. VandeWeerd said that technology helps aging adults maintain one of the most important aspects of their lives, dignity and independence: The ability to stay in their homes. When surveyed, 90 percent of older adults say they want to age in place, she told the forum’s audience.

"That’s very understandable because home is where all the best things happen and we want to make sure we are able to facilitate people’s preference to stay in place," she said.

For a relatively low cost of $400 to $600, the research team has developed a sensor network that gathers data of older adults in their daily lives at home, capturing when they are up and moving around, if they are taking their medicines, and if they have visitors to provide the social interaction necessary for both mental and physical health. "We use the language of home – it's a sort of song about how you move around your space," she added. 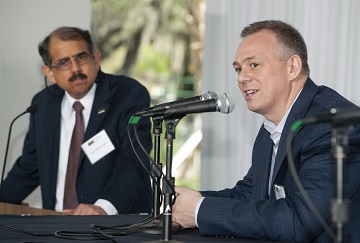 Andy Miller, senior vice president of innovation and product development for AARP, said the rise of technology provides incredible opportunities for individuals, institutions and private companies to invent new devices or apply emerging tools to the needs of an aging population – which represents an astounding $7 trillion dollar global market even though technology companies have typically focused on meeting the needs of younger people.

AARP is traveling the country looking for ways to leverage its influence as the nation’s largest organization representing the needs of older adults as a way to identify potentially transformative technologies coming out of universities and smaller startups.

"We need to get people to think about technology and how to use it for a solution – not just to have a whiz-bang gadget," he said. 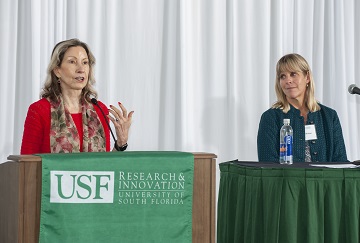 USF College of Nursing Associate Dean Dr. Theresa Beckie shared with the audience her work in developing a home-based cardiac rehabilitation system that emerged from interviews from patients and providers on what tools they could use to improve care – particularly for women, whose symptoms are not always recognized as heart disease and who have historically have had less effective disease management tools.

Their new app includes a chat function where patients can converse with other patients and a dashboard that is monitored by a health practitioner. Beckie told the audience that students – who bring to the team both advanced technological skills and a comfort in incorporating technology into their daily lives – have been invaluable in the process.

To learn more about the forum, the presenters and their projects, view the event brochure here.