TAMPA, Fla. (Dec. 3, 2019) – The National Academy of Inventors announced Tuesday that University of South Florida faculty members Dr. Samuel Wickline, a pioneer in nanotechnology targeting heart disease and other disorders, and Dr. Fred Leonberger, whose discoveries in fiber optics drove the development of the modern communications industry, are new 2019 Fellows.

Recognition as an NAI Fellow is among the world's top honors for academic inventors. 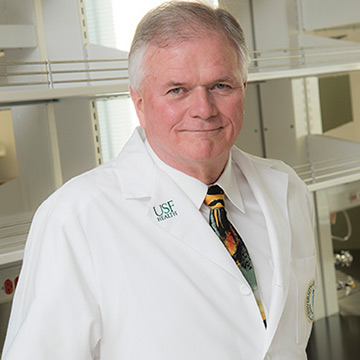 Dr. Wickline is the founding director of the USF Health Heart Institute and is the Tampa General Hospital Endowed Chair in Cardiovascular Medicine. He also serves as associate dean for cardiovascular research, and a professor of cardiovascular sciences, molecular pharmacology and physiology, and medical engineering at USF.

His pioneering research has investigated the molecular basis of disease-causing processes using novel imaging methods to diagnoses and treat a variety of cardiovascular conditions, including targeting atherosclerotic plaques that cause heart attacks. His academic entrepreneurial work led to the development of advanced cardiac imaging techniques, such as magnetic resonance imaging (MRI) of the heart to assess coronary artery disease.

In 2016 Dr. Wickline joined USF as the founding director of the USF Health Heart Institute, now under construction as part of the university's new Morsani College of Medicine in downtown Tampa. He has been instrumental in helping recruit scientists, forge industry partnerships and design new basic research laboratories and clinical research space that will accelerate the Institute's graduate student training and pursuit of translational medicine and entrepreneurial activities when the facility opens in the coming weeks.

He has authored more than 300 peer-reviewed papers and holds 37 U.S. patents. Dr. Wickline is a fellow of the American College of Cardiology and the American Heart Association, among many global honors. Dr. Wickline earned his MD degree from the University of Hawaii School of Medicine, and completed his residency in internal medicine and fellowship in cardiology at Washington University School of Medicine, in St Louis. 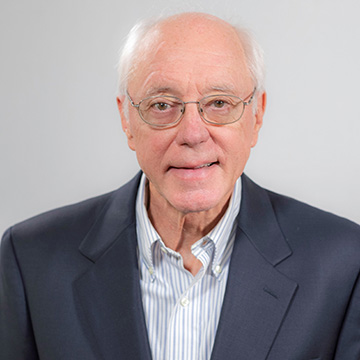 Dr. Leonberger is a faculty member in USF's Institute for Advanced Discovery & Innovation and is a principal of EOvation Advisors, a technology and business advisory firm based in Sarasota. He has served as a co-founder, board member and advisor for 10 photonics companies and Massachusetts Institute of Technology Center for Integrated Photonics System. He is a member of the National Academy of Engineering, among many worldwide honors earned during his career.

Dr. Leonberger is one of the pioneers who invented and developed technologies and components that enabled major advancements in the fields of photonics, extremely high-speed laser modulators, and integrated optics, which are enabling technologies for high-speed internet fiber optics communications, telecommunications, cable television and specialized products for research laboratories.

He has authored or co-authored more than 160 papers and conference presentations, and holds 16 patents. He holds a PhD and master's degrees from the Massachusetts Institute of Technology, and a bachelor's degree from the University of Michigan, all in electrical engineering.

The 2019 Fellow class represents 135 research universities and governmental and non-profit research institutes worldwide and collectively hold over 3,500 issued U.S. patents. Among the 2019 Fellows are six recipients of the U.S. National Medal of Technology & Innovation or U.S. National Medal of Science and four Nobel Laureates, as well as other honors and distinctions. Their collective body of research covers a range of scientific disciplines including neurobehavioral sciences, horticulture, photonics and nanomedicine.

The NAI Fellows Program highlights academic inventors who have demonstrated a spirit of innovation in creating or facilitating outstanding inventions that have made a tangible impact on quality of life, economic development and the welfare of society. To date, NAI Fellows hold more than 41,500 issued U.S. patents, which have generated over 11,000 licensed technologies and companies, and created more than 36 million jobs. In addition, over $1.6 trillion in revenue has been generated based on NAI Fellow discoveries.

The NAI Fellows Induction Ceremony will be held on April 10, 2020, in Phoenix, during the Ninth Annual Meeting of the National Academy of Inventors. The complete list of NAI Fellows is available on the NAI website.

About the University of South Florida
The University of South Florida, established in 1956 and located in Tampa, is a high-impact global research university dedicated to student success. The USF System includes three separately accredited institutions: USF, USF St. Petersburg and USF Sarasota-Manatee. Serving more than 50,000 students, the USF System has an annual budget of $1.8 billion and an annual economic impact of $4.4 billion. USF ranks in the top 25 nationally for research expenditures among public universities, according to the National Science Foundation. In 2018, the Florida Board of Governors designated USF as a Preeminent State Research University, placing USF in the most elite category among the state's 12 public universities. USF is a member of the American Athletic Conference.

About the National Academy of Inventors
The National Academy of Inventors is a member organization comprising U.S. and international universities, and governmental and non-profit research institutes, with over 4,000 individual inventor members and Fellows spanning more than 250 institutions worldwide. It was founded in 2010 to recognize and encourage inventors with patents issued from the United States Patent and Trademark Office (USPTO), enhance the visibility of academic technology and innovation, encourage the disclosure of intellectual property, educate and mentor innovative students, and translate the inventions of its members to benefit society. The NAI has a close collaborative relationship with the USPTO and is one of three honorific organizations, along with the National Medals and National Inventors Hall of Fame, working closely with the USPTO on many discovery and innovation support initiatives. The NAI publishes the multidisciplinary journal, Technology and Innovation. www.academyofinventors.org